Last night, I was coding, as one does, and I wanted something that I thought FOR SURE there was a method in Ruby’s Enumerable module for already, because Enumerable is awesome and The Best Module Ever. But alas, there is not. My problem was:

I read through all of enumerable, then tried my hand at a solution, and it just wasn’t pretty or satisfying. This is unusual for Ruby! So what did I do? I asked my coworkers and I asked twitter.

Between all of us, we came up with 12 significantly different solutions:

And as if this wasn’t Tom Sawyerish enough, I decided we then needed to have a vote. As of this writing, with the polls open about 24 hours, I’ve had 41 responses to these 3 questions:

So then, of course, I had to benchmark the results. And I don’t benchmark things very often, so I don’t know how to do it off the top of my head, but luckily I had Schneems’ Rails pull request open in another tab where someone benchmarked parts of the code using evanphx’s benchmark-ips gem. And a number of things appealed to me in the gem’s readme, namely “No more guessing at random iteration counts!” If there’s anything I know, it’s that I don’t know how to pick iteration counts. The code I used is on GitHub, and I’m sure I messed something up– please send me pull requests if there are improvements to be made!

So I put all the solutions into a Benchmark.ips block, using powers of 10 for the length of the array we’d be counting (this is the n in the Big-O analysis). I used a sampling of lowercase letters in the English alphabet for the values. Benchmarking arrays that are all the same value or all different values instead of a random distribution of values is left as an exercise to the reader.

The absolute winner is:

There are two things that I don’t think yinz are going to like about these results:

Here’s the text output of the script I ran. It cuts off because I let it run overnight and it still wasn’t done in the morning, but we did get full runs up to n = 1,000,000.

The last section in each run shows the comparison of the candidates to each other; here’s that section for 1,000,000 items:

You’ll have to look at my code to see which names correspond to each solution.

In order to get the nice, Big-O like graphs that I remember learning all about in college, I took the iterations per second from each N’s comparison section of the results, took the inverse so that I had seconds per iteration, and compiled them in a spreadsheet then made a graph of the data on a logarithmic scale: 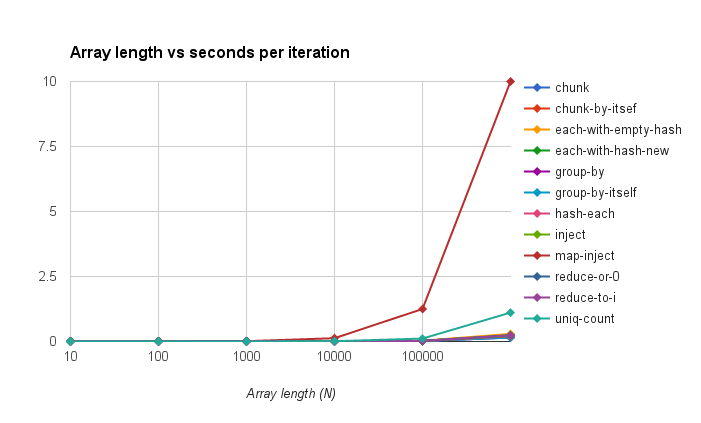 UPDATE 2015-08-08: Gankro kindly mentioned that I didn’t put the y-axis in logarithmic scale originally, here’s the fixed version. This lets you see more differences between the 10 similarly-performing solutions: 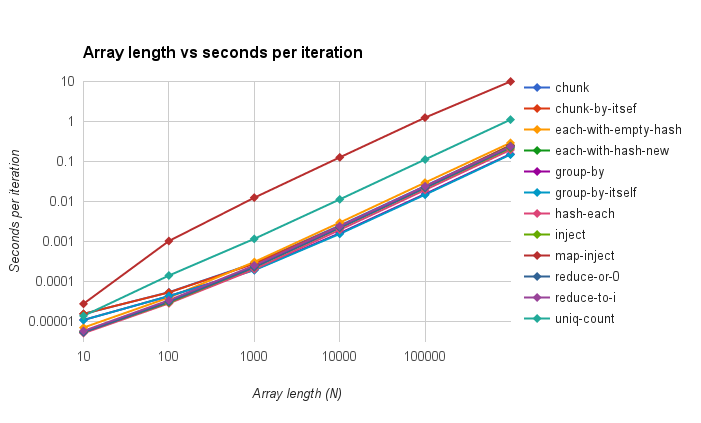 So there you go! Go forth and benchmark your own code!